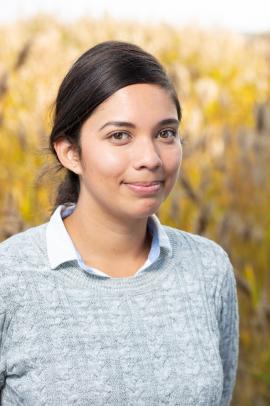 My interest relies on the rising need to adapt and mitigate climate change with greener solutions that create synergies between people, the environment, and private-public stakeholders. Based on the case study at the Cañaveralejo river in Colombia I developed a quantitative-qualitative strategy that combined hedonic pricing models, GIS, and surveys to forecast the impact of a particular green infrastructure project on land values (monetization-measurement of ecosystem services) and its capability to mitigate the risk of flooding in vulnerable areas. This was later used to encourage stakeholders for investment and the development of land value capture tools.

Currently, I am working on my Ph.D. research, which is part of the RECOMS - ESR15 program: Participatory GIS - Stimulating resourceful community management of open space through dialogue and visioning at Flanders Research Institute for Agriculture, Fisheries and Food (ILVO). This research is the convergence of my previous academic and work experience with the curiosity to push PGIS further into community development and space management.

Nohemi Ramirez Aranda is an architect graduated in 2015 at Universidad Iberoamericana Torreon (Mexico). From 2009-2015 she gained expertise on design and construction during her position as Chief of the design department at a local architecture firm as well as urban design collaborations with the local municipality and Universidad Iberoamericana. In 2016 she received a Master in Science in Urban Management and Development with a specialization in Urban Environment, Sustainability and Climate Change (UESCC) at Erasmus University Rotterdam. During 2016-2017 she collaborated with Lincoln Institute of Land Policy, Universidad del Valle and Institute for International Urban Development (I2UD) in the Program on Latin America and Caribbean cities. She also participated in the development of “CAST”, a capacity assessment tool on behalf of C40 and Deutsche Gesellschaft für Internationale Zusammenarbeit (GIZ) tested in cities like Bangalore, Bogota, and Mexico to identify existing gaps that have prevented implementation of urban projects and strategies.

Settlements around the world are projected to keep growing in the following years along with their spatial needs which have been satisfied so far at the expense of modification/loss of natural spaces. In Flanders, urban dynamics such as sprawl and counter urbanization take 6ha of green open space per day meaning that by 2050 Flanders will run out of open space. Along with these dynamics, current and new challenges such as the compensation for biodiversity loss, recreational areas, climate change solutions, energy transitions to decarbonized alternatives and changes in agriculture forms are expected to drastically alter Flanders’ remaining green open space (GOS). Aside from its economic value, GOS provides multiple social and ecological benefits that are critical to ensure the quality of life of people, thus the necessity to preserve them .However, the efforts to prevent its hardening have been rather inefficient due to spatial planning and spatial development mainly relying on “exchange value” which exposes GOS like natural areas, parks and agricultural land to be highly vulnerable towards construction activities and infrastructure as its market value does not reflect its “use value". In the last two decades major advancements in technology have allowed communities to use Participatory GIS (PGIS), community mapping or Participatory Spatial Planning (PSP) as bottom-up tools to reach “the silent majority” and give them a saying in shaping their environment in a way that includes their interest. Nonetheless, the potential of these tools to promote good governance (GG) in the inclusion of community values into spatial planning is yet underutilized by governments. Hence this research investigates the use of PGIS to include community use values into spatial planning for a better open space management that reflects citizens’ interests. The research will use the Woluwe area in Flanders as a case study, more specifically three areas along the Woluwe stream.